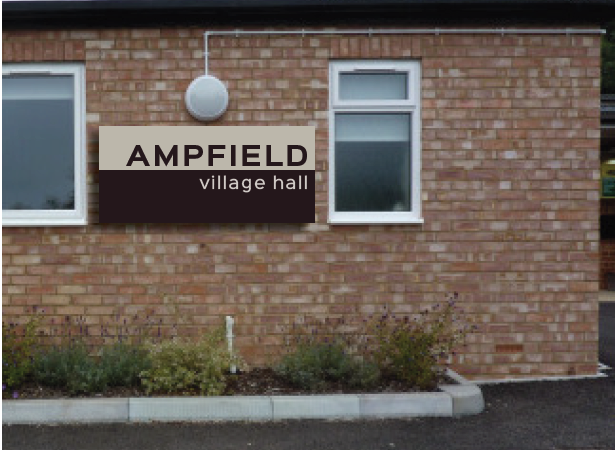 The Hall is a popular venue for parties and meetings. For more information about bookings and Hall availability please contact Martin Hatley (Village Hall Manager) on 02380 254040 or Email: martin.hatley@btconnect.com .

It was a very sad day, in March of last year, when the hall committee had to put up the signs announcing that the Monthly Village Market, together with most other activities that take place in the hall, had to be suspended due to Central Government’s Covid 19 preventative measures. Little did we think it would be over a year before we could reopen. The Village Hall Committee decided that during these sad unprecedented times, the closure actually provided them with the golden opportunity to carry out some much needed general maintenance, repairs and renewals and some more major enhancements. The work was carried out by a mixture of paid subcontractors and a lot of volunteer work.

The first major task was to borrow a scaffold tower for the main hall to enable the cleaning of the walls and ceiling and the total redecoration of the main hall. The teething troubles with the new hall floor were then sorted out and new oak skirting board fitted to match the floor. Seven original doors, at the stage end, that were looking the worse for wear, (complete with dormant woodworm!) have been replaced with smart new doors that meet the current regulations.

The old kitchenette is now a bar/drinks servery. A new fixed bar has been installed, complete with a sold wood worktop all round with a wine cooler below. This was part financed by a £1,000 local Borough Councillor’s grant. The new kitchen and Faber Garden Room have been kindly decorated by volunteers. The serving hatch counter has been lowered and slightly extended to form a level serving area. The area under the stage was investigated and a large trailer load of assorted rubbish was discovered and disposed of. This included some old rotten fence posts (!) All is now clear and hoovered. Finally, the finishing touch has been provided by the hanging of some beautiful new curtains to the windows in the main hall and garden room.

We are very grateful to the Test Valley Borough Council for smoothly distributing the various Government Covid 19 grants that the hall was entitled to claim to cover the general overheads and upkeep of the hall during the shutdown. This helped a great deal to fund the above work. Now the hall has been ‘deep cleaned’ and a number of automatic hand sanitisers installed, etc., and risk assessments carried out, we are all ready to open the doors again, subject to the announcements by the Government and any restrictions we will be obliged to adhere to.

For all hall hire related enquiries please ring or email the Hon. Hall Manager, (Martin Hatley) on 07970 501050 or Email: villagehall@ampfield.org.uk

If you would like to join our enthusiastic, friendly team of volunteers and become a member of the Hall committee, then please don't hesitate to contact the Hon. Secretary, Julie Trotter,  julie@ampfield.org.uk , for further details.

On September 1st 1950, the original WI Hall was opened by Mrs Faber, she said  "This spacious red brick building has a permanent stage, dressing rooms, kitchen and cloak rooms. It is the only Hall in the village and will prove useful for many functions." Mrs Faber thanked her husband Captain S F Faber for the gift of the land and added  "this is a wonderful occasion for us. It is an event we have longed for since the Institute was formed two years ago." Captain Faber replied, "this hall is going to make a tremendous difference to the life of the village. He was sure it would enable everyone to know each other better."

Gradually, over the years, the WI found that managing the upkeep of the Hall was becoming more difficult and in 1994 a group of enthusiastic volunteers started to organise working parties to help with the work. On July 15th 1996 the WI leased the Hall to a Management Committee and three holding Trustees for a nominal sum of £1 per year, reserving the right to use the Hall for 52 days of the year and exclusive use of one wardrobe ! Major alterations began in February 1997 when the toilets were refurbished and all the doors were replaced. In the Autumn of 1997 all the windows were replaced. All the improvements were made possible by enthusiastic fund raising, hall hire charges and occasional grants. In December 2nd 1997, the first Pantomime was held in the Hall, it was the Pied Piper of Hamelin and began our long association with Forest Forge. Work began on an extension to provide a large storage area and a committee room at the rear of the Hall in June 1998. The small kitchen was refurbished in July 1999. The Village Market was opened for the first time on September 1st 2000. In July 2003 the Hall was given a completely new roof and the kitchen was updated for a second time. An evening of Celtic music and dancing with Matt Tarling and his band on September 20th 2003 marked the opening of the newly refurbished and painted hall, much of the hard work had been carried out by volunteers during the summer holiday.

In the summer of 2015 the Hall underwent it's most extensive transformation. A large new well equipped kitchen and annexe were added along with a super new patio.  A committee room and new toilet facilities completed the project. The car park provided much needed parking for the Hall users. In January 2016, Ampfield Parish Council completed the purchase of the freehold of the Village Hall from the Hampshire WI. The Hall is managed for the Parish Council by a group of Trustees, some are representatives of the user groups and others have been appointed from the local community. The Hall is a charity and is managed by the Trustees in the best interests of the charity. Most of the income for the upkeep of the Hall comes from the monthly Market, regular fund raising events, hall hire and occasional grants. All the Trustees are enthusiastic volunteers committed to keeping our Hall in good order and providing a top quality venue for all our many community groups and events.